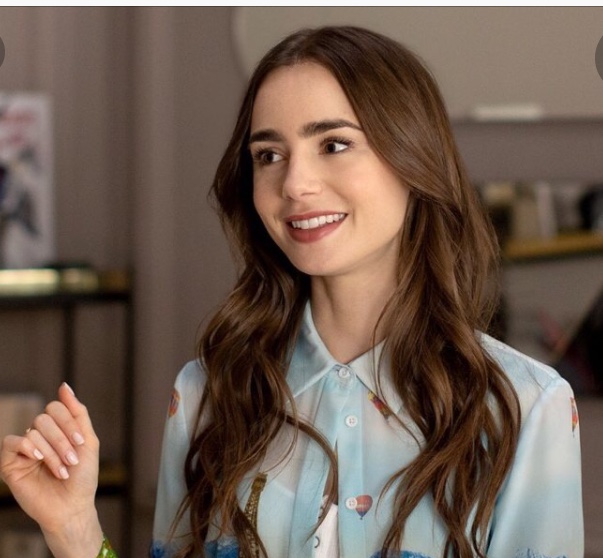 The new Netflix series Emily in Paris: Innocent or not? An American only chees – y – and Sincerre?

I didn’t know Star was also the director of Beverly Hills and brought Sex and the city into TV, this is why FT and Vanity fair wrote about it. Nevertheless, there is something appealing in it, once you overcome the cheesy and snooty characters.

Emily is very american, included the concept of “good” girl, which is quite ambiguous if not hypocritical. This is also why she can’t be compared with Audrey, though sometimes her thin face reminds us of the famous actress. Her wardrobe is really garish and kitsch, but some clothes are fine and at least she is joyful. Paris with high heels it’s every woman’s dream, and she can because it’s fiction ! Pure evasion ! In addition, men are attractive. I don’t know if male audience can see the same for the women. So Vanity fair which spent so much ink in brand details, can really avoid this type of advertising.

Back to Emily, she can’t be Audrey because she’s not a princess, not even modern, she is american ! She refuses to sleep with her friend’s boyfriend and with her boss’ lover (who is also married), ok, but she sleeps with a guy just met whom she dumps a few days later because he doesn’t want to come to a shitty Opera in which she is interested only because of her job, treating him as a snob french philosopher.

Then, during a week-end in Champagne, she finishes in bed with the 17 years old best friend’s brother, but again, she’s a good girl except for Sincerre in the morning.

I didn’t like the character of Sylvia, her boss, but she really embodies the hateful french woman, though until girls like Emily will be around bosses like Sylvia will always exist. Concerning the clash between french and american style, it’s exagerated, as the rest. French people work hard as well.

In the last episode Emily has not made her sentimental choice yet, she is interested in Matthieu, her rich client who invites her to St. Tropez and in his parisian boat, but also in Gabriel, her best friend’s boyfriend, though the two just split up and Emily is already in Gabriel’s bed, just to keep a good memory. Without forgetting Antoine, her boss’ lover, who helps Gabriel with Emily but he just wants to sleep with her as well, and very likely he will succeded in the next episodes. A new modern free woman dealing with many opportunities, pretending to be « innocent », how will react to this populated sea of fishes ?

Moreover and again, is Emily really that innocent? Mais Paris is Paris, touristic but always charming. Emily crosses very often Pont des Arts, and after the lockdown I’m particularly attached to this Pont as without it I couldn’t have survived. Mais can innocence survive in Paris or is it obliged to leave?

Will Emily remain or not ? I will surely watch the second series.